Home  :  News : The City Council will incorporate 39 non polluting buses before June of next year 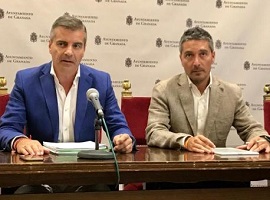 The council of Mobility, César Díaz, affirm that this historic replacement improves an obsoleted fleet where more than 50 per cent of vehicles have more than 12 years.

The government team of the City Council of Granada is going to replace the current urban buses fleet, before June of next year, with 39 new non pulluting vehicles. To that effect was announced this morning the council of Mobility, César Díaz, who has defined this initiative as a historic replacement that reduce the age of an obsolete fleet where more than 50 per cent of vehicles have more than twelve years.

So, the council has explained that the Local Government has agreed to use the reversion fund of the current contract, of 11,6 millon euros, to adquire these new units. In detail, César Díaz, has announced the immediate incorporation- due to September - of 2 news units with hybrid technology and 10,6 meters length, that will be presented coinciding with the Mobility Week and another electric five mini buses as well.

Assuring that it is an absolute irresponsibility of the previous government team to achieve this obsolete public transport, the council has explained that the City Council will define in August the technology of new vehicles to incorporate the fleet.

We have hybrid technology, electric -that no doubt is the technology of future- and gas, has said. The problem of betting for gas technology is that in Granada there is no gas station and the studies made by specialized companies in this sector, involve an investment between million and million and a half euros.

In response to this, Díaz has bet for the possibility to turn to european funds, subsidies, to address this investment. If this was possible and feasible, probably we will bet for this type of technology, but if not, it seems that we will use hybrid technology, that are electric and last generation diesel oil, we are talking about Euro6, with practically zero emmisions .

After remarking that this file has legal and audit reports are favourable, the council has remarked that in just 45 we have a proposal of investment in the public service fleet of 11,6 millon euros and its amortization on years 19 to 22. The rest of amortization years will be incorporated to the conditions of the new contract we already are working on.

In this point, the responsible of Mobility has said that the government team has given maximum priority to this new contract and that already had several meetings with legal and audit services, to define criteria for the new administrative concessions, that we what to be defined for the last trimester of 2019 with the idea that on the first semester of 2020 we can address the tender of this new concession, concluded.