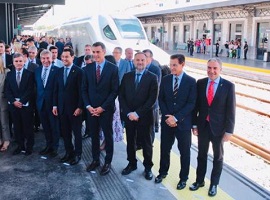 The Major of Granada, Luis Salvador, has signalled this morning his great satisfaction for the launching of the AVE in Granada, that has been described as an historic day for all the city. At last, we can celebrate that Granada has an essential communication infrastructure, that has been reclaimed long time ago, and after more than four years isolated from the rest of Spain by train and numerous breaches of central governments, at last we have an AVE that, for sure, will bring an increasement of economical activity that can result in employment creation, has assured.

The Major has his confidence that the AVE will improve quality tourism in Granada, and also will revitalise Conference sector in the city, easing also the connections for the executives of companies that want to settle in Granada.

Beside this, Salvador has emphasised the importance of communication with AVE not only with destinations like Madrid or Barcelona, but specially with capitals as Sevilla or Malaga to ease the territorial cohesion of Andalusia..

We belive that, once the AVE is operative in Granada, it is necessary to continuate and fulfill the project, which implies the structure of a detour in Loja and search for a better integration in the city, has said the grenadine Major who, also has remarked the necessity of agree with ADIF the price review for the service provision and adecuate them to the trip length and real speed trains will have, that in this first phase of launching, will not get to the high speed that other AVE have.

Finally, Salvador has celebrated the achievement of a great hope of Granada with the launching of AVE and has settled the ways to continue, from this point, achieving new challenges for the city: the AVE is a critical step that must get us a little bit closer the the consecution of the particle accelerator for Granada.