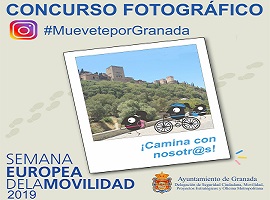 Check out the contest rules of the contest on Instagram #MueveteporGranada on the occasion of the European Mobility Week 2019.

Participate in the contest until 3:00 p.m. on September 17, 2019 by posting on Instagram how many images you wish by tagging them with the hashtag #MueveteporGranada.

2. Purpose of the contest

The purpose of this contest is to encourage and reward citizens who move through the city of Granada on foot, by bicycle and by public transport on the occasion of the European Mobility Week 2019, by focusing on the benefits of these forms of displacement for our health, for the environment and for our economy.

The theme chosen for this year by the European Commission is focused on walking and pedaling safely and the motto: Walk with us!

The contest is intended to collect images within the municipality of Granada.

The deadline to participate in the contest by publishing the images will begin from the moment of its publication on the web and municipal social networks, ending the participation period of the photographs on 9/17/19 at 3:00 p.m.

Natural persons residing in the municipality of Granada may participate in the contest free of charge and voluntary, over 18 years, previously registered in the Instagram social network with a personal user.

They must actively participate in the contest according to the mechanics set out in this document.

Participants will be rewarded with two prizes:

For the first day of the promotion until the last day included, users of Instagram will be able to submit as many photos as they want through the social network, these photographs must show how the participants move on foot, by bicycle and on public transport in the municipality of Granada. Photographs must be tagged with #MueveteporGranada and presented publicly in open, as a post not a story. If the account is private, a snapshot of the publication must be sent by private message to the Instagram account of Movilidad Granada.

All the images that meet the requirements of these contest rules from the first day to the last day will participate in the contest and may qualify for the established prizes. The best images will be chosen by a jury made up of 4 officials and the Councillor or designated representative by him/her, belonging to the Delegación de Seguridad Ciudadana, Movilidad, Proyectos Estratégicos y Oficina Metropolitana of the Granada City Council.

In the event that there were not enough participants to hand out the prizes or any other reason, the Granada City Council reserves the right to cancel the contest.

The winners authorize that their Instagram name and the image with which they participate in the contest are published or used by the Granada City Council and they agree not to delete the publication. The winners will be notified by a publication in the Instagram account of the Mobility Area, instructing them to send a private message with their contact details (full name, email and telephone).

The winners of this edition will not be eligible to participate in the edition of the next year.

Contents of any kind not related to the contest may be deleted.

The aim of this competition is to ensure that the competition between the different people is done with equal opportunities and with strict respect for the rules of good faith. For that reason, the Granada City Conuncil, reserves the right to automatically and immediately exclude any participant who violates the rules of good faith, observes an inappropriate conduct, uses fraudulent means or fails to comply with these contest rules at any of its extremes. Participations that include sexist messages or content will not be accepted. Likewise, the images of participation in the contest will not contain messages or images that attack or are likely to threaten morals, ethics, good taste or decorum, or infringe or violate intellectual or industrial property rights, and we must warn you of the consequences and responsibilities that you may incur if you make an illegal or fraudulent use of them. The Granada City Council will act immediately in the event of a complaint or suspicion that infirngements of intellectual property rights may be taking place, or in the event of any content that may be considered inappropriate and will proceed to remove it immediately, being able to request the permanent blocking of the infringing user.

The Granada City Council declines any responsibility for the consequences that the voluntary, consensual and deliberate exhibition by the person who uses its images may involve himself, his family, friends and/or relatives, or other third parties, or the diffusion or exhibition of the same by its part or by third parties, or its reproduction, including on other websites, blogs, social networks or any other means, support or mode of digital exploitation or not, online or offline, taking into account that both the publication of comments or the insertion of illustrations and texts, such as their dissemination diffusion to third parties, are completely voluntary, consented and not requested. Therefore, the contestant will respond directly to any claim, complaint or demand from third parties in relation to the violation or infringement of possible rights that may arise from the texts or materials that a user has published.

Winners will be announced within 2 days after the end of this contest through an Instagram post indicating that a private message with their personal data must be sent. The winners will have 1 working day from publication to communicate. If, within that day, the Mobility Area does not receive an answer including all the necessary data to deliver the prize, it reserves the right to name new winner(s), following procedure described in these contest rules or may declare the prize not awarded.

10. Acceptance of the bases

The simple participation implies the acceptance of these bases in their entirety so that the manifestation, in the sense of not accepting them, will imply the exclusion of the participant and, as a consequence, the Granada City Council released from the fulfilment of the obligation contracted with that participant. By accepting the prize, the winner may make use of the prize on terms on which it has been awarded, so that any additional service he or she wishes to make use of will be at his or her own expense, as well as the liability that may arise from the collection and use of this prize.

The exact conditions of the prizes provided by the collaborating entities are the sole and exclusive responsibility of the same.

The Granada City Council reserves the right to use names and images of the publications involved, as well as those of the winners, for the purpose of sustainable mobility campaigns or similar promoted by the City Council itself.