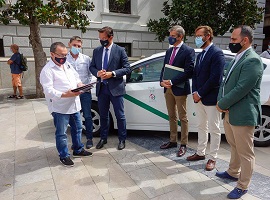 Due to an agreement between Majors Luis Salvador, José Antonio Carranza and Juan Ramón Castellón, respectively; will allow taxis free circulation, collection and transport of passengers from the capital and the mentioned towns.

In Mariana Pineda meeting hall of the City Council has hosted this morning the agreement for the Shared Taxi Area between Granada, Pulianas and Cenes de la Vega; an agreements signed by the majors of the three municipalities, Luis Salvador, José Antonio Carranza and Juan Ramón Castellón, respectively; that will allow taxis free circulation, collection and transport of passengers from the capital and the mentioned towns.

After the agreement, the major of Granada, Luis Salvador, has pointed out the value of an agreement in sustainable mobility that allow access of public vehicles adapted to persons with reduced mobility of surrounding municipalities; encourages the proffesional sector of taxis and, in the end, break barriers to provide better services and has announced the will of local government for this area to keep increasing and incorporating new towns.

On the other hand, Mobility Councellor, César Díaz, has explained that this is a dynamic measure which guarantee a proper offer of taxis between adjacent towns increasing traffic interactions and mutual influence between their transport public service.

As he said, once the agreement has passed perceptive procedures approval by plenary of respective towns and authorization of Junta de Andalucía-, this shared area will boost this proffesional sector increasing the use of taxi among these towns.

He also explained that, since the signing of the agreement, 560 taxis of the capital will operate in Cenes and Pulianas too, while vehicles of these municipalities will do it immediately in Granada, once they pass the same inspection that grenadine fleet have to.

To Díaz, one of most important points of the agreement is that it gives answer to the request of adapted vehicles for disabled people in Cenes and Pulians, that don´t have this adapted vehicles but Granada does and, as the major also said, has remarked the purpose to incorporate more interested municipalities in this shared area, a project to be boosted in cooperation with Gremial del Taxi.

Also, in César Díaz´s opinion, the agreement makes a step forward, a great advance in metropolitan mobility away from parochial visions and aimed to efficiency, quality, public service and sustainability.

Agreement´s duration will be four years and, for its effective control, a technical commision is created that will give advise and proposals.

Beside the majors of Granada, Cenes and Pulianas, has been in this signing the territorial promotion delegate of Junta de Andalucía, Antonio Granados.

Delegation of Citizens Safety and Mobility.
City of Granada